Would you like to switch to the accessible version of this site?

Don't need the accessible version of this site?

Contact us! Email us with your full name, number, and any comments or questions you would like to add below!

Cooper Veterinary Hospital opened its doors in June of 1969, the answer to the dream of Dr. Ralph Cooper and his wife Jeanette.  Dr. Ralph Cooper had taught at Auburn University Veterinary School after graduation and was ready for his own practice. The first hospital was located in Monroe, LA on old Hwy. 165 South at the corner of Buckhorn Bend and was a remodeled gas station and convenience store.  The Coopers and their two sons, Clark and Clint, lived in an apartment in the back of the building.  Dr. Ralph Cooper quickly built a practice that served clients all across north Louisiana.  After a couple of years Dr. Ralph Cooper built a lar 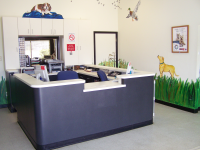 ge animal hospital to better handle the needs of his large animal clients and hired Dr. Ronnie Powell who worked with him for a year before moving to Shreveport.  The Coopers built a home in West Monroe in 1973 and began building a modern veterinary hospital with an adjoining large animal hospital at the current location at 5234 Cypress Street in West Monroe.  Dr. Johnny Robertson joined the practice soon after the building was complete.  He later moved to Newellton to practice there.  Dr. Roger Lindsey worked for Dr. Ralph Cooper from 1982 to 1983.  After Dr. Robertson left the practice Dr. Charles Cobb was hired in 1983 and the practice continued to grow.  At the death of Dr. Ralph Cooper in 1987, Dr. Cobb operated the practice for five years with the help of Dr. Barbara Shelor.

In 1993 Dr. Clark Cooper, a graduate of LSU Veterinary School, returned home to manage the practice his father had begun while Dr. Cobb and Dr. Shelor continued to assist on a part-time basis. Dr. Clark modernized the practice by installing a state-of-the-art computer system and the latest techniques in veterinary medicine with the idea of comprehensive medical and surgical care for animal patients. Dr. Shelor moved to Ohio and Dr. Kevin Fuselier became a member of our team until June of 2004 when he moved to South LA. Dr. Domini McKeithen Cooper graduated from LSU Veterinary School and joined the staff in 2004 and was here until her husband was transferred out of state over a year later.  Dr. Tara Malta-White joined the team at Cooper Veterinary Hospital in April 2006.  Dr. Kristy Hamilton Mounts interned with Cooper Vet and then joined the staff in June 2006, leaving a year later to have her first child.  Dr. Clint Harper, who had also interned at Cooper Vet, moved back from TX to join the staff in June 2008.

Through the Internship Program Dr. Cooper developed, this hospital has had the opportunity to teach both pre-veterinary students as well as veterinary students nearing graduation the art of practice and details essential to their training.  Through this program, Cooper Veterinary Hospital became a respected training ground for many bright young men and women.

Dr. Cooper expanded the size of the hospital in 2002 creating new surgery suites and a kennel facility to accommodate the needs of the growing practice.  The hospital contains a full laboratory and pharmacy as well as X‑ray, ICU, surgical areas, and a bathing facility.  State-of-the-art Digital X-ray and modern ultrasound equipment were installed in 2008, giving the doctors the latest technology in that field to work with.  Most diagnostic and treatment procedures can be handled within the hospital.  Animal Emergency Clinic handles evening, weekend, and holiday emergencies for our small animal clients but we maintain emergency coverage for large animals.

For 40 years, Cooper Veterinary Hospital has continued its tradition of providing the best veterinary care possible. We look forward to continuing this tradition with the help of a dedicated, knowledgeable, and skilled staff.